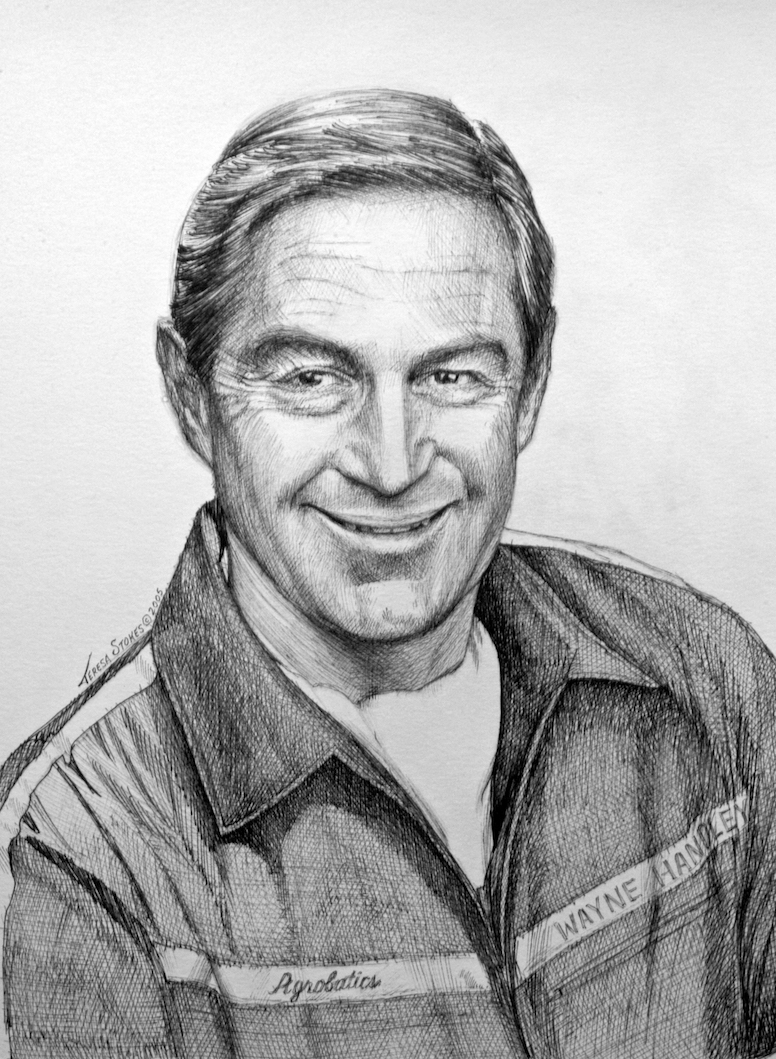 Wayne Handley first flew an air show in 1984 at Auburn, CA after training himself in the precisions of aerial control. He developed, and is most famous for, the inverted flat spin. Previously, performers such as Art Scholl had done a few spins. Wayne made it into an art form and still holds the record of 67 inverted flat spins. He probably should be most honored as the person who taught such performers as Sean D. Tucker, Bill Stein and Chandy Clanton in the intricacies of aerobatics. The late great Leo Loudenslager, himself seven times the National Aerobatics Champion, once referred to Wayne as “the guy with the perfect stick.”

Beginning his air show appearances in the 1980’s (after an aviation career that began in 1957 as a naval aviator then an ag pilot and multiple time aerobatic champion) Wayne has logged over 26,000 hours of flight time. His air show career was distinguished by such showmanship and innovation as the “Agrobatics” performance he developed. This unique presentation brought a whole new understanding and appreciation of the challenges faced by crop dusters to audiences across the country. His performances were always awe inspiring and left audiences wanting more.

Wayne has always pushed the performance envelope while emphasizing safety. His record 67 inverted flat spins (which he subsequently expanded to 78) is but one example. In 1999, the last year of regular air show performances by Wayne, he established a time to climb world record for 3,000 meters and then six months later set another record for 6,000 meters at Oshkosh. These are just some examples of his performance accomplishments, all of which were represented during his air show flying.

Wayne has demonstrated innovation in his air show performances since the beginning but none more so than his vision and imagination which resulted in the Turbo Raven. That aerobatic airplane, with a positive thrust-to-weight ratio was Wayne’s dream come true. This one of a kind aircraft could go straight up, stop, then go straight up again. The blazing 450 degrees per second roll rate, top speed of 300 knots and reversible pitch propeller made it a stunning performer. It was this “fastest climbing propeller driven air plane in the world” that enabled Wayne to set the time to climb records. Wayne with the Turbo Raven was able to again push the performance and innovation envelopes and thrill air show audiences nationwide.

However, Wayne’s contributions to the air show industry do not stop there. He has always served as an inspiration and mentor to countless other pilots, aspiring performers and established performers as well. Sean D.Tucker, has an original maneuver in his routine called the Son of Edwin, named in honor of Wayne. Also, Wayne has long been an outspoken safety advocate by conducting safety seminars (and related instructional flights) entitled “Spins and Unusual Attitudes.” His involvement within the ICAS organization includes service on the ICAS Ethics Committee, the ACE Committee and the ICAS Board of Directors. In addition, Wayne led the industry by breaking new ground in landing a major corporate sponsorship for the Turbo Raven.

Yet another example of Wayne’s accomplishments and many awards was in 2000 when he was honored by the Aero Club of Northern California, a branch of the National Aeronautic Association, with its Crystal Eagle Award. The inscription on this award reads: “In acknowledgment of sustained leadership in the field of agricultural aviation and concurrent record setting activities as a professional acrobatic pilot who added new dimensions to the domain of precision air show flight”.