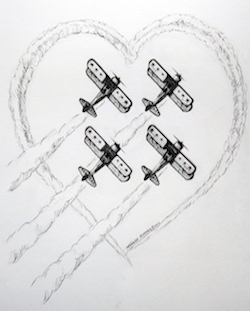 The Red Baron Pizza Squadron grew out of a brilliant promotion by the Schwan Food Company that was originally scheduled for a single year. Beginning in 1979, barnstorming pilots dressed in period clothing and cruised the U.S. in 300 horsepower Stearmans, making appearances and towing banners to promote the newly created Red Baron brand. The popularity of the program caused the company to revisit and eventually extend the run. As barnstormers will do, the pilots began to innovate beyond the job description to evolve the program to include promotional rides, formation flying and aerobatics. The final pieces fell into place with the conversion to 450hp engines and the hiring of a veteran announcing team. The Pratt & Whitney 985 engines allowed the team to perform tight four-ship formation aerobatics and more challenging maneuvers while skillfull narrative was provided to describe how difficult the flying was.

Key to the success of the Squadron was the passion of their maintenance crew with its highly skilled specialists. The original crew chief climbed the ranks to become an airshow team pilot in the late eighties. After a hiatus, he returned to the team as Director of Maintenance (DOM) and remained with the Squadron as DOM and as a support pilot. He was the last Red Baron to fly a Red Baron Stearman on a regular mission, bringing the last plane home to Minnesota in the dead of winter. Fifty-five pilots (sixteen of which performed in airshows) and dozens of maintenance and support personnel saw service with the Red Baron Squadron over 29 years from 1979 to the end of 2007 and became a lasting part of the culture and legacy. At its height, the Squadron fielded two four-ship teams and maintained a stable of additional promotional pilots.

The Red Baron Pizza Squadron brought a new perspective and set new standards for sponsorship in the airshow industry. They set a new example for civilian team organizations and inspired others. Lastly, they made millions of friends and fans in and outside of the airshow industry. These are the contributions that make the Red Barron Pizza Squadron worthy of the ICAS Air Show Hall of Fame.