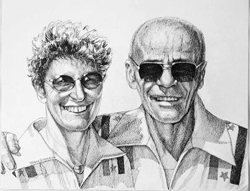 Daniel Heligoin and Montaine Mallet flew together in their matching CAP10’s as the French Connection Airshow for over 25 years. They billed themselves as a husband-and-wife aerial ballet and innovatively flew their act to pre-recorded self-narrated poetry and custom-composed music.

Heligoin started performing in the United States in the CAP 10 in 1974 to market the aircraft for Avions Mudry of France, and teamed up with Mallet shortly thereafter. Their dual routine was considered a headline act.

They liked to say they flew the closest act you’ll ever see, and most would agree. French Connection signature maneuvers included flying a full 360-degree circle with Montaine inverted above Daniel in a canopy-to-canopy position and an exciting cross-over roll.

Daniel was the originator of the “Heligoin Circle,” an outside circle flown on the knife edge. Heligoin and Mallet received the “Bill Barber Award For Showmanship” in 1987, and served on the award’s selection committee ever since. They were also past recipients of the “Art Scholl Memorial Showmanship Award.” Both were known in the aerobatic community as highly skilled aviators, always willing to share their expertise and their love of flying.

Daniel started flying gliders at age 16, joined the French Air Force and, by joint agreement between the U.S. and France, was sent to the United States in 1953 to earn his pilot’s wings with the U.S. Air Force. While with the French Air Force, Daniel was a fighter pilot and instructor. He was also a member of the French Air Force Jet team (similar to the U.S. Thunderbirds), flying the Fouga Magister at the time. He then was one of the founders of the light aircraft Aerobatic Team where he flew Stamps, Zlins and then the CAP 10B and single place version at the time called the CAP 20. While in that Team, he taught aerobatics, flew air shows and competition. He was France Unlimited Aerobatic Champion in 1971 and 1972. He joined Avions Mudry (manufacturers of the CAP 10B) now CAP Aviation, at the beginning of 1972, as its chief demonstration pilot and was sent to the United States in the Summer of 1973, with Montaine, to market the CAP 10B. Daniel had more than 15,000 hours in everything from J3 Cub to Mirages, of which over 8,000 have been flown performing aerobatics. Fellow pilots say Daniel was probably the most experienced formation pilot in the world today and probably among the ones with the most aerobatic instruction given. His enormous amount of experience as a pilot and instructor, his will to share his experience, his sense of entertainment, his enthusiasm and “joie de vivre” made him one of the best air show pilots in the world.

Montaine began to fly while attending aeronautical engineering school at the age of 19, following a desire sparked reading the lives of the aviation pioneers such as Guillaumet, St. Exupery, Mermoz and others. In 1972, with a degree in engineering, she joined Avions Mudry as well. In her free time, she began studying aerobatics with Daniel and started to compete in the Spring of 1973. She was sent with Daniel to the United States as a technical adviser and to help demonstrate the CAP 10B to potential customers. Montaine had well over 8,000 hours of flight time, of which over 3,000 had been flown performing aerobatics.

Both Daniel & Montaine taught aerobatics in the U.S. since 1973. They were based at Flagler County Airport in Bunnell, FL