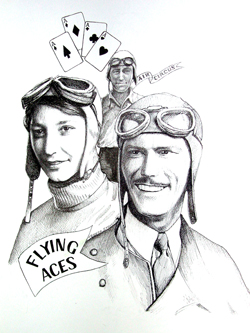 Jimmy Woods founded the Flying Aces Air Circus in 1929 and served as its co-leader, along with his wife, Jessie Woods. While a number of notable pilots worked with the Flying Aces, their star performer was Vincent “Squeek” Burnett. The Flying Aces, were the longest running aerial circus in U.S. history, providing a much-needed diversion and family entertainment for a ten-year period which included the Great Depression.

The air circus itself incorporated numerous aspects of entertainment, drama and comedy. Shows included aerobatic flying, wingwalking, parachute jumping, tricks such as the inverted ribbon cut and the tail-wire pickup, and dogfights. The group employed innovative entertainment “hooks” such as “pyrotechnics” with flour-filled balloons, and invented personas for the air circus participants (to increase their mystique).

The Flying Aces Air Circus and its individual members, Jimmie and Jessie Woods and Squeek Burnett, were responsible for a number of firsts in the air show arena. The Flying Aces were the first to charge admission to an air show. Jimmie and Squeek developed perhaps the first “dogfight” act, using a Stearman and a Travel Air.

Burnett was the first to perform an inverted ribbon cut. He also pioneered the art of picking up small objects, like a handkerchief, right off the ground with the tail wire while flying inverted. And, the Flying Aces were probably the first to make extensive use of local sponsors, exchanging goods and services for advertising of the sponsor’s product during air circus promotions and performances. The Flying Aces were, in fact, constantly building novelty into aerial routines in order to attract crowds and entice sponsors.

Although the Flying Aces disbanded in 1939, both Jimmie and Squeek pursued aviation until their deaths. Jessie retired from wingwalking, but she remained a favorite fixture at air show gatherings through the early 90’s. In 1991, more than 50 years after her last trip on a wing, and at the age of 82, Jessie once again created the early history of air shows by riding the wing of an airplane. Jessie Woods died in 2001.