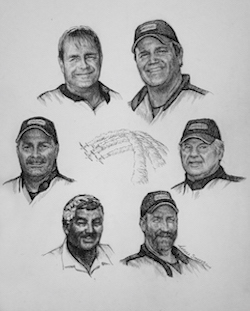 Established in 1985, the AeroShell Aerobatic Team is the longest running civilian team of its type in North America.

It all began three decades ago when Alan Henley and Steve Gustafson decided they’d try a two-ship formation routine in their AT-6 Texans. Later that year, they were joined by Ben Cunningham. And the North American Aerobatic Team was born.

By the late 1990s, the team was flying the iconic four-ship formation that has become so familiar to air show audiences across the United States.

In 2000, they signed the agreement that made them the AeroShell Aerobatic Team. And with the sponsorship, the team’s planes were outfitted in their distinctive white, red and black paint jobs.

Today, with its tight formations, billowing smoke systems and attention-getting radial engines, the AeroShell Team thrills millions every year, and has become one of the most recognizable and well-known air show performance teams in the world.

Outstanding piloting skills, genuine humility and a reputation as southern gentlemen eager to do whatever is necessary to make a show successful have helped contribute to 30 years of incident-free entertainment and an unparalleled reputation among event organizers in every corner of the country.

And now they have earned a well-deserved spot in the ICAS Foundation Air Show Hall of Fame.