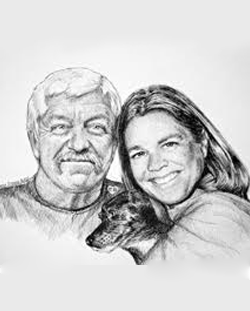 This husband and wife professional aerobatic and skywriting team has been full time in the airshow industry since 1981. 2011 marks their 31st year. Both Steve and Suzanne have been professional pilots since 18 years of age.

Suzanne is currently the only active female skywriter in the world. The original Pepsi Skywriter aircraft that she flew for 22 years is on display in the Boeing Aviation Hangar at the Steven F. Udvar-Hazy Center, which is part of the Smithsonian’s National Air and Space Museum. She was Pepsi’s skywriter for more than 23 years.

Steve flew his first airshow at 19 in 1965. Steve not only performs his daytime air show performance, but also brought back night pyrobatic shows in 1989 at air shows and other events.

Their team is a past recipient of the International Council of Airshows Sword of Excellence and the Bill Barber Showmanship Award and will be honored in 2012 with induction into the “Living Legends of Aviation”. Their contributions to air show safety and charitable organizations within the air show industry have been the foundation of their passion for aviation. Both continue to amaze audiences today with their special talents in the Oregon Aero SkyDancer, a Super Chipmunk that Steve has been performing in all of North and Central America and the Caribbean Islands since 1989.

Along with their first famous pooch, Charlie Brown and for the last 13 years, their Pooch Pax, they continue to share the magic of flight in their Airshow, Skywriting and Barnstorming.