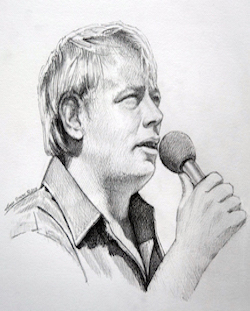 Sonny comes from a family of fliers. His first published photography appeared at the age of 14, when photos he took were printed in an local NY paper. He has had a lifelong interest in air shows and as an announcer is blessed with a voice of depth and clarity. He is one of those announcers who not only narrates the events, he takes the listener on a trip, adding the right script at the right time to enhance an event and knowing when to shut up and let the action speak for itself.

Sonny’s skills are not limited to announcing. He has been taking photos and video for years, and to list all his accomplishments would fill up many pages. He has an eye for beauty and balance. He is a published writer, having authored “Fliers”, a coffee table book of early air show acts and personalities. He has also been on the other side of the camera and was featured in the cult favorite air show movie from the 70’s called “Cloud Dancer” starring David Carradine. It is Sonny’s voice that you first hear, and the person you first see, and he actually had more on-camera lines than the star. Many members of our airshow family can trace their first inspiration and influence to an airshow where Sonny was announcing. Sonny is a retired US Airways Captain who now resides in Central Florida.

Sonny is also a historian to the air show industry. His knowledge and memory of events and significant dates is second to none. Many of the events he recalls were experienced first-hand. He is called on by those in the industry whenever they need help with a fact or clarification to support a project. He has probably forgotten more than most people remember about air shows and the people who fly in them. He is the voice for the Airshow America DVD series that to date has sold over 3000 copies. Sonny is always there to support those needing narration or voice-overs for a charitable project or an industry video. It is time we honor Sonny for his life-long contributions to our industry, his professionalism and mentorship.