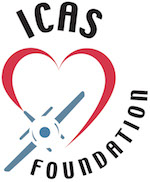 THIS SCHOLARSHIP IS CURRENTLY SUSPENDED UNTIL FUNDING IS MADE AVAILABLE FOR IT. PLEASE CONTACT THE ICAS FOUNDATION IF YOU ARE INTERESTED IN POTENTIALLY FUNDING THIS SCHOLARSHIP

Daniel Heligoin and Montaine Mallet together formed French Connection Airshow for over 26 years. Their 180 hp Cap 10Bs were stock other than the smoke system. Montaine was a former aeronautical engineer who studied aerobatics with Daniel, who was originally a glider pilot, French Air Force fighter pilot and French Unlimited Aerobatic Champion. The couple met while working at Avions Mudry, makers of the Cap airplane, and the pair were the American distributors for the aircraft.  In their air show performances, Mallet led routines and Heligoin followed just four feet from her wingtip.

The French Connection is recognized for flawless mirror formations, the Fleur de Lys and their signature musical aerial ballet.  Following their deaths during a practice session in May of 2000, family members, friends and fans worked together to create a memorial fund that could be used to give, as Daniel would say, "the gift of wings."

The French Connection Memorial Scholarship is seeking a male and a female flight instructor who need financial help acquiring aerobatic training so he or she can do a better job teaching or to seek a position giving aerobatic instruction. Together, the French Connection Scholarship Committee and the recipient will select the aerobatic flight school or instructor, to ensure the level of instruction received will reflect the high standards Daniel and Montaine strived for.

The recipient must be a certified flight instructor (CFI), and must use the scholarship for aerobatic flight training.Scholarship Amount: $2,000.

This scholarship is currently in suspended status. Applications are not being accepted at this time