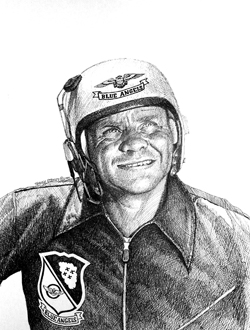 A native of California, Captain Roy Voris graduated from Salinas Junior College in 1939. He entered the Navy in 1941 and by February 1942, he was commissioned an ensign and designated a naval aviator. During his first deployment in World War II, Captain Voris flew the Grumman F4F “Wildcat” from the aircraft carrier Enterprise. In his following cruise, he flew Grumman F6F “Hellcats” from Guadalcanal in support of the First Marines and from the carriers Enterprise and Hornet.

In 1946, the Secretary of the Navy and the Chief of Naval Operations directed the establishment of a Navy flight exhibition team to demonstrate precision fighter maneuvers at Navy air shows and at public events. Captain Voris was selected as Officer-in-Charge and Flight Leader. He chose the pilots and maintenance personnel from among the Navy’s best officers and sailors. He picked the aircraft – the Grumman F6F “Hellcat,” made modifications to reduce the aircraft weight and implemented a new blue-and-gold paint scheme. The team flew its first show at the Southeastern Air Exposition in Jacksonville. The Blue Angels first public performance earned the team its first trophy. That trophy sits in a place of honor at the current home of the Blue Angels in Pensacola.

In his first tour with the Blue Angels, Captain Voris flew the F6F “Hellcat” and the F8F “Bearcat.” In 1951, Captain Voris returned to reform and lead the team flying the F9F “Panther” jet.

After Captain Voris retired from the Navy in 1963, he worked for the Grumman Corporation in Bethpage, New York, for the next 10 years. In 1973, he joined the National Aeronautics and Space Administration (NASA) in the Office of Industry Affairs.

In 1985, Captain Voris retired from civilian employment to Monterey, California, with his wife, Thea; they have been married 53 years. In 1993, he was honored by the Air Force in a “Gathering of Eagles” ceremony as one of 20 aviators internationally who had made significant contributions to the world of aviation.

Butch Voris was inducted into the International Council of Air Shows Foundation’s Air Show Hall of Fame in December 2001. In July 2005, Butch Voris passed away, but he will always be the “First Number One.”