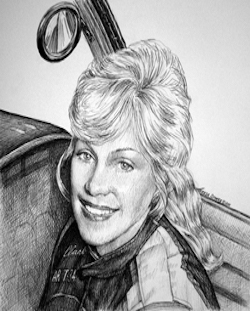 Orphaned by age 15, Julie lost both parents within one year, to sudden, tragic deaths. Her father, Captain Ernie Clark, was killed in a very notorious airline crash in 1964. Undeterred by the tragic passing of her parents and without family support, Julie’s quest to become an airline pilot is just one of many accomplishments she has achieved.

Throughout Julie’s 31 years in the air show industry she has maintained the highest standards of excellence and a selfless commitment to the promotion of air shows and aviation. She is an air show pilot, and one of the first female pilots to fly and become captain for a major commercial airline. She has maintained an impeccable safety record; having logged over 31,000 accident-free flight hours, and is checked out in more than 66 types of aircraft.

Julie began flying air shows in a 3-ship formation team in 1978 and in 1980 began her solo career. She understands how to touch people in a meaningful and memorable way – as she was the first performer to choreograph her flying routine to music. In 1985 she began a dialogue with the air show narrator to enable her to communicate directly with the fans.

Her patriotism will always be remembered as she taxis in with the U.S. flag waving. You may also recall her flying in the Mopar-sponsored T-34 Mentor for 19 years and more recently in the Chevron Mentor for four years. Julie has been recognized by the air show industry, the U.S. government, the military and other aviation organizations as the recipient of more than 40 individual awards over the last three decades.