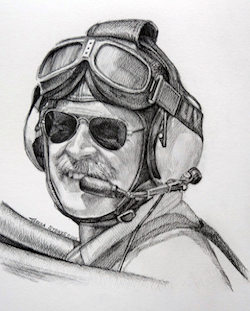 The undisputed virtuoso of air show performances in a Stearman biplane, John decided early in his 38-year air show career that rather than upgrade his 220 horsepower stock Stearman, he would study and master energy management, sequence optimization, aerodynamic ground effect and other aerodynamic tools of world-class air show performers. He read every book available on aerobatics and carefully observed those pilots whom he sought to emulate: Bob Hoover, Art Scholl, Duane Cole, and Bob Heuer. He combined that knowledge with his own remarkable skills as an aviator to create an air show act that was entertaining to general audiences, but awe-inspiring to pilots who viewed his abilities as nothing short of phenomenal. He expanded his repertoire by offering a J3 Cub comedy act, and his plane-to-helicopter transfer act with Roger Buis was all the rage within the North American air show community for several years.

John was also a thoughtful and generous member of the air show community. He was an active Aerobatic Competency Evaluator (ACE) and served for several years on the ACE Committee. He was a reliable advocate for air show safety, but espoused fewer regulations and more self-policing among air show performers.

John got an early start. He soloed a J3 Cub at the age of 14 and was a regular attendee at the EAA convention as a teenager. He experimented with radio-controlled aircraft as a kid and learned about the mechanics of aircraft from his father and grandfather. He has been a Captain for a major U.S. airline for many years. As impressive as the list of members of the ICAS Foundation Air Show Hall of Fame already is, it is now even more prestigious with the addition of John Mohr.