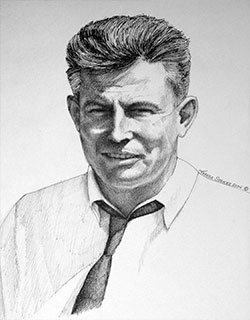 Harold Krier joined the Army Air Corps and served as a Flight Engineer during World War II. After the war he earned his A&E license, learned to fly and started the airport in Ashland, KS that bears his name. In the late forties he built his first aerobatic airplane, a clipped wing cub, and taught himself aerobatics out of the old Air Corps primary flying manual. His interest in perfection led him through a series of airplanes – the Krier Kraft Acromaster, the Great Lakes Special and the Chipmunk.

With these, Harold represented the U.S. in competitions in Spain, Russia and Germany. Harold was a master mechanic and builder of airplanes but he freely gave it all away to anyone who asked for help. He was a quiet man whose flying spoke louder than a shout. He flew for the pilots, not the crowd, and only the pilots in the crowd could fully appreciate the skill and smoothness with which he could perform any acrobatic maneuver. Perhaps more than any other individual, Harold Krier was responsible for the revival of aerobatics in this country in the fifties and early sixties.