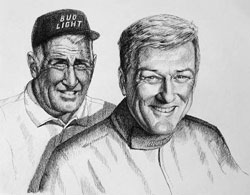 Born in Battle Creek, Michigan, Bill began pursuing his dream of becoming a pilot by studying Aviation Engineering Technology at Western Michigan University. Unable to afford flying lessons, Bill got his feet wet by jumping out of airplanes! He finally got his chance to fly when he was accepted into the Naval Aviation Cadet Program in Pensacola, Florida in 1965.

After his initial training in the F-4 Phantom, Beardsley was deployed to Southeast Asia with Phantom Fighter Squadron VF-102 in 1968. There he earned his wings many times over, with 126 combat missions over enemy territory. Bill was awarded seven air medals, as well as; the Navy Commendation medal with Combat V, the Navy Unit Commendation, the Vietnamese Cross of Gallantry and the Vietnam Service and Campaign medals. After he returned from Vietnam in 1970, Bill was selected to become a member of the Blue Angels, the Navy’s premier flight demonstration squadron. He describes his two year stint with the “Blues” as “demanding and intense, but professionally rewarding.”

“The Bud Light Micro Jet is unique to watch, challenging and demanding to fly,” said Beardsley, nicknamed “Burner.” “You can never let go of the controls, but then you could never find anything else in the world that even comes close to matching the thrills of flying something so small, so fast and so much fun.”

Following his distinguished Navy career, Beardsley began a new job in 1973 flying some of the largest planes in the world with a major airline. And in 1988 he took the controls of the smallest plane in the world, the Bud Light Micro Jet. During his many years of flying Bill amassed over 17,000 flight hours.

Bill resided in Gulf Breeze, Florida where he enjoyed the camaraderie of friends and family until his death.. When he wasn’t flying, he enjoyed water sports, skiing, and jogging as well as driving his vintage 1948 Model A John Deere Tractor!

Big B’s educational and professional background is far removed from aviation. He received a bachelor degree in police administration from Michigan State University and earned his master’s degree in criminal justice from Georgia State University.

In 1969 Bill retired from the Criminal Investigative Division of the Army after having served 25 years. He was a veteran of WWII, the Korean Conflict and the Viet Nam Conflict.

Upon his retirement Bill joined the faculty at Georgia Southern University as an assistant professor of criminal justice. A call from Georgia Governor Jimmy Carter convinced him that his services were needed in state government. He spent four years working for Carter as the Director of the Georgia Bureau of Investigation. His reorganization and professionalization of that agency resulted in it being recognized as one of the most respected state criminal investigation entities in the U.S.

Following his stint in state government, Bill returned to the university teaching environment at Georgia State University. In 1976 he relocated to Florida where he joined the Florida Department of Corrections as a prison inspector/investigator.

Another significant telephone call came in 1988 this one from Leo Loudenslager who was looking for someone to work as ground crew for the Bud Light Air Force. Big B was somewhat familiar with the air show industry as his son, Burner, had flown with the Navy Blue Angels in the 70’s and was then flying the Micro Jet for Leo. Bill quickly submitted retirement papers to the State of Florida and began his adventures behind the wheel of the Bud Light van. He also serves as the team narrator; but he is probably best known as the figurehead for the group known as the UAG United Airshow Grunts.