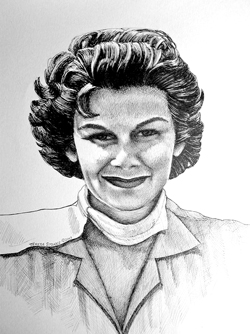 As a young girl in Pensacola, Florida, Betty Skelton first soloed in a Taylorcraft at the tender age of 12 and then again officially at age 16. Betty wanted a career in aviation and started with a clerical position at Eastern Airlines. She worked for Eastern Airlines while also obtaining her commercial, flight instructor, single-engine land and sea, and multi-engine ratings. At 17, she had the necessary flight hours but was too young to join the Women Air Service Pilots (WASP) and it was disbanded shortly before she reached the required age of 18 and 1/2.

Active in the Civil Air Patrol since its beginning in the early forties, she held the rank of Major. She became a test pilot, and occasionally flew helicopters, jets, blimps and gliders. She first started aerobatic flying in a Fairchild PT-19 when a Tampa airport manager suggested she learn a loop and a roll for the local amateur air show.

She bought her own aircraft, a 1929 Great Lakes 2T1A biplane and began her profession career in 1946 at the Southeastern Air Exposition in Jacksonville, Florida, along with a new US Navy exhibition team, the Blue Angels. One of her specialties was a maneuver known as “the inverted ribbon cut,” in which she flew her plane upside down, 10 feet above the ground, and sliced through a ribbon stretched between two poles. In 1948, Frankman purchased a Pitts Special experimental bi-plane, a single-seater open cockpit airplane weighing only 544 pounds. By 1950, Ms. Skelton and her open-cockpit biplane, Little Stinker, were famous worldwide.

From 1948 to 1950 she won three international aerobatics competitions for women. Her air race victories resulted in her plane, “Little Stinker,” becoming the most famous acrobatic aircraft in the world. It is now displayed in the National Air and Space Museum. In 1949 and 1951 she set the world light-plane altitude record. In a car, she set the women’s land-speed record three times at Daytona Beach, Fla., the last time being 1956 when she hit 145.044 m.p.h. in a Corvette (the men’s record was only 3 m.p.h. faster). She holds more combined aviation and automotive records than anyone else – man or woman – in history.